So Liam's first week of Kindergarten has come to a close, and I've spent this evening really reflecting on not only this huge milestone, but on his childhood so far. 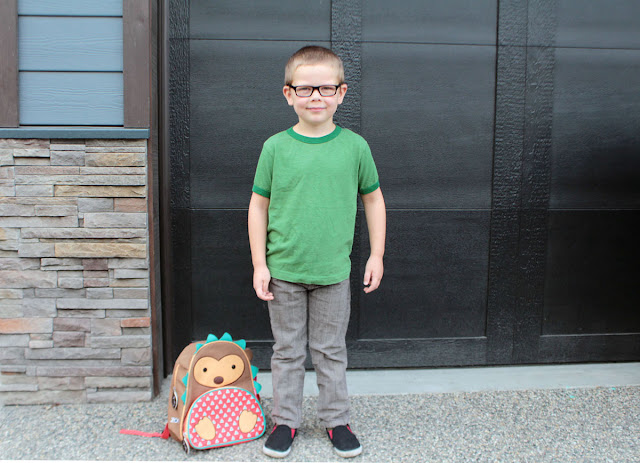 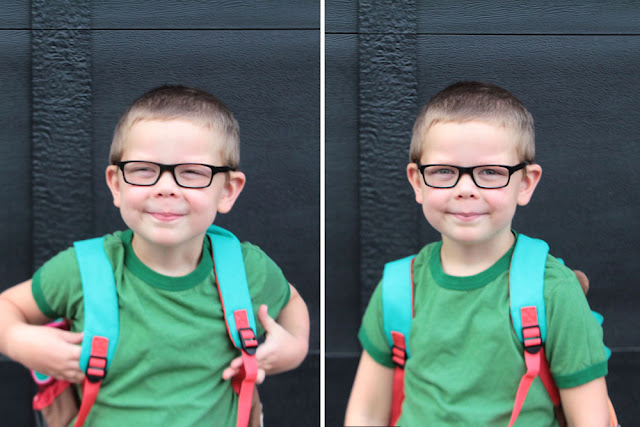 As the always overly involved mom, I pictured myself dressing Liam perfectly on his first day, making a big deal about it, starting some first day traditions, taking excessively Pinterest-inspired photos with signs and chalkboards and what not...but then the day arrived, and I really just soaked in the experience of my one and only child heading off to school, the place he will grow and learn for the next 13+ years. So Liam dressed himself, I quickly snapped a couple basic pictures and off we went.

I really have to commend his teacher, and the school on their transitioning children into Kindergarten. Especially for my 5 year old, with no siblings and having never really participated in a traditional preschool or gone to a daycare - the transition into full-day away-from-home school surrounded by 20 other kids was an extreme change. They structured it flawlessly with a meet and greet a few months back, and then for the past week there were "mini sessions" growing from 1 and 2 hour days, to the full 6 hour experience by the end of the 7 days of class. You can only learn so much at the meet and greet and through newsletters - so I really didn't know what to expect from the school until it was go time. 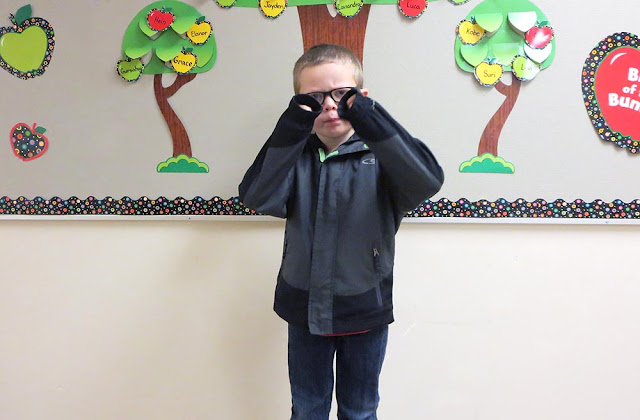 Don't mind Liam being extremely uninterested in this momtographer.

Some things that I really like about the school include their appreciation of parent volunteers and respect for our interest and desire to peek into the classrooms. They definitely encourage parent participation, but when appropriate - in the mornings the kids line up, do a sweet little "kissing hand" to their parent, and get welcomed individually by the teacher, and no parents are to come inside the classroom. The kids who are upset about saying goodbye (there are a few each morning) are encouraged to just say a quick goodbye, and the parent is instructed to just give the child's hand to the teacher, and happily walk away. Making it a long and dramatic ordeal is harder on the child and really disrupts the other kids in the morning - by observing this tactic a few times, you really see how 99% of the time, the crying is over within seconds of the loved one leaving.

Another thing is safety, which admittedly was probably my only real concern about putting him in school. I was extremely relieved to see all the (simple, but comforting) measures put in place to make kids secure at school, such as wearing coloured pinnies on the playground and having kids in older classes help keep track of them, getting them to and from the playground. After school, the teacher and/or principal personally walk the Kindergarteners to their correct busses and the bus driver does not let them off the bus without a caretaker present. Both at school and getting off the bus, the child has to point and reference who is there to pick them up (off of a list of people who have been given permission to do so by the parent/guardian) before being allowed to go.

There are so many things I love about the school, a lot of which might be the norm in schools around the nation, but having not been in Kindergarten myself for what...20 years now, I definitely don't recall this type of attention to detail when I was a kid! Like I said, I had no real idea what to expect (and I'm not the kind of person to ask a million questions and be outspoken at parent-teacher events) so I was quite pleased to see how everything runs at school! 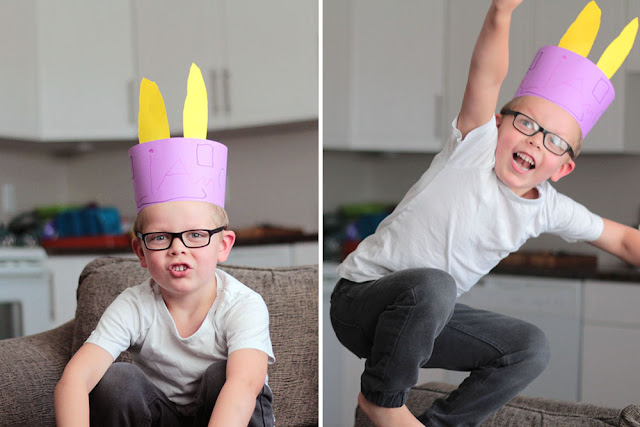 As a few of my friends with older children mentioned, the reality of Liam being in Kindergarten didn't quite hit me (or him) for a few days. I really expected myself to bawl that first day, but I surprised myself and held it together. Of course, Liam held it together as well (no one is surprised) and only at the end of the week did the exhaustion really kick in. He has been needing a nap every day after school, and has been getting frustrated by little things at home a lot quicker, which has never been the case before (excluding the first 6 months of his life, I can probably count on one hand the number of times he has ever thrown a true tantrum or been inconsolable.) His impatience with simple tasks is a very new thing for him, but of course a very normal part of the transition period. He is so genuinely excited about school each day, and happily states how comfortable he feels there already. As for me, I didn't have my weepy moments until a few days in and now that it's really sinking in that the past 5 years are over and a new chapter has begun - I think I'll continue to struggle with it for just a little while. My son is an incredibly independent child, and I have to remind myself that his preference to be at school surrounded by his new friends rather than be at home is not a personal diss toward me haha! I go through emotionally highs and lows, both being extremely grateful that I got to stay at home and raise such a fantastic child, and then just being bummed that this period is over. I feel a little silly talking about it because in the grand scheme of things, 6 hours a day is nothing. It's not like we've shipped him off somewhere, or he's leaving the nest - we still have the evenings and weekend and all that together - I think it's just the act of him getting on the bus or walking into the classroom that makes me realize how old he's gotten. These are also the moments that my infertility hits me hard because, 1) I pictured myself with one or two more little ones by the time my first child went off to school, and being essentially left alone each morning just makes my failure to conceive that much more glaringly obvious 2) of course the sheer distraction of a younger siblings at home would definitely make this transition easier and the days go by faster. While I am most definitely appreciating my "freedom" for lack of a better word, and recognize that my life is that much more open for opportunities now - my world feels drastically altered now that my son is in school and it's taking me a moment to catch up and accept it all. 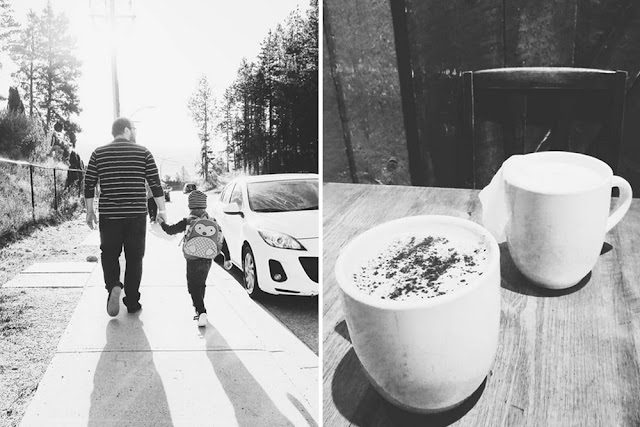 My wonderful husband dropping Liam off at school,
and our subsequent coffee date (the first one in 5 years, just the two of us!)

Seeing my little boy hop off the bus at the end of every day is just so great to watch (the first day, he ran to me shouting "Mom! The bus doesn't even have seatbelts!") and he comes home with the most fun stories and just adorable Kindergarten life experiences like:
"Mom! I made a new friend today"
"Oh that's great hunny, what's his name?"
"I don't knowwww Mommmmm, but he has an Avengers backpack, so he had to be my friend!"

Of course, as the overly involved mother, I can't help but think about the choices he'll make and how he will develop as a person even moreso with all these new influences around him. I have to believe that the kindness, honesty and respect Robert and I have instilled in our son thus far will really stick with him even when we're not there to observe and correct him. 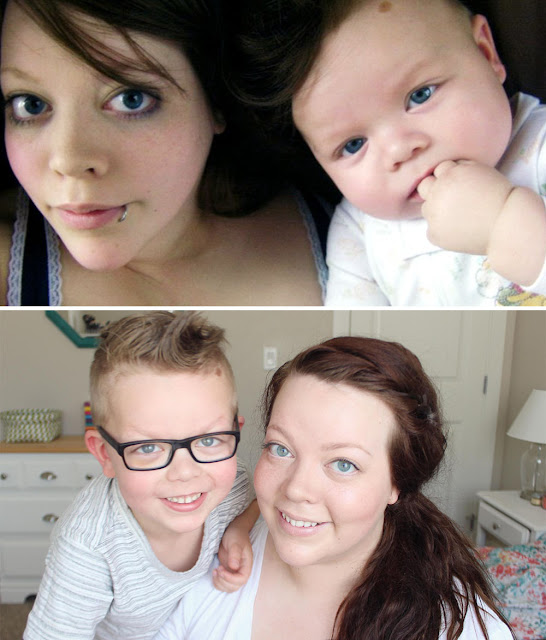 Anyway, that is everything I'm feeling in this first week and I am just so glad he is loving the new experience. I can't wait to volunteer at school (probably so much that Liam is going to get majorly sick of me) once the class is in a more regular routine, and see all the things he does and learns throughout the year. I am on the verge of tears at any given moment, this being one of them as I reminisce of how my once sweet baby boy in my belly has grown into a fantastic young man - so I must go before I start sobbing uncontrollably - yet again!